Blu-ray
Make Way For Tomorrow: The Masters of Cinema Series 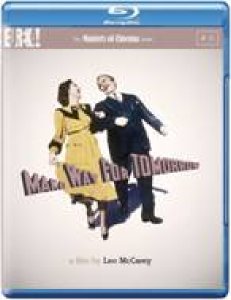 Of Make Way for Tomorrow, Orson Welles told Peter Bogdanovich: "Oh my God that's the saddest movie ever made." Long unavailable for home viewing, Leo McCarey's personal favourite among all his films (which included The Awful Truth and An Affair to Remember) is sad, yes, but it also stands as cathartic affirmation of the dignity of human feeling, and in the testament of such achieves a subtle complexity of characterization on par with Renoir, Ford, and Hawks.

Victor Moore and Beulah Bondi, two of the great Hollywood character actors, appear makeup-aged beyond their actual years to portray the couple whose house the bank has foreclosed upon (the film was set and produced in the midst of the Great Depression), and who are forced subsequently to move into their children's homes in the city. A near-musical restructuring of gratitude and debt ensues once the offspring deem the couple's lodging an imposition: the two are separated, then reunited weeks later... as they glide inexorably into an uncertain future.

Unrelentingly unsentimental, yet maintaining a balance of pathos and levity unseen in not only American studio pictures but most of the rest of world cinema, Make Way for Tomorrow exerted a powerful influence on Yasujirô Ozu's Tokyo Story and several other key entries in the Japanese master's body of work. It is a film profoundly concerned with questions of filial obligation and the way we treat one another as human beings; it is a film that, to give Welles the last word, "could make a stone cry." The Masters of Cinema Series is proud to present Leo McCarey's truly great Make Way for Tomorrow for the first time on Blu-ray anywhere in the world.

Make Way for Tomorrow is released on 25 October 2010


SPECIAL BLU-RAY ONLY EDITION INCLUDING:

• Gorgeous high-definition transfer of the film in its original 1.37:1 aspect ratio
• 20-minute video piece with filmmaker Peter Bogdanovich (The Last Picture Show; The Cat's Meow) discussing the film and Leo McCarey's career
• 21-minute video piece with writer Gary Giddins discussing McCarey's work and the social and political contexts of the film
• Optional English SDH subtitles for the deaf and hearing-impaired
• Lengthy booklet featuring a new essay on the film by writer and Library of America editor Geoffrey O'Brien, and an excerpt from Josephine Lawrence's source novel Years Are So Long