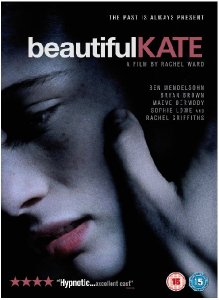 Recognised with numerous nominations at the 2009 AFI Awards, including Best Film & Best Director, Beautiful Kate is courageous and incredibly beautiful in its narrative and visual style, encompassing everything that is great about Australian cinema today.

Beautiful Kate is based on the novel by American author Newton Thornburg, (Cutter and Bone).

Set in Australia's mesmerising and captivatingly beautiful outback, Beautiful Kate is in essence an intense and tragic love story about the sexual awakening of three siblings growing up in isolation. Told in the parallel narratives of past and present, returning to the family home with his much younger fiancée Toni, played by rising star Maeve Dermody (Black Water), Ned is forced to confront the realities surrounding the dramatic death of his twin sister Kate, played by newcomer Sophie Lowe, when she was 16. As memories from his youth come flooding back, it becomes apparent that their sibling intimacy had crossed over into a physical relationship, haunting him with the inescapable feelings of desire and guilt.

On the remaining days leading to Bruce's death, a newfound tenderness grows between father and son, as feelings of anger and bitterness soon turn to forgiveness and the past that has haunted the family is finally laid to rest.

At times devastating and at times dealing with subject matters hard to swallow, Rachel Ward's accomplished debut feature, cannot fail to get under your skin.