Some Dogs Bite has been nominated in the category of Best Cinematography at this, the 11th International Woodstock Film Festival. The film's director of photography is Wojciech Szepel (Tess of the D'Ubervilles, Mrs Mandela). David Charap (Dive, In the Land of the Free, Mrs Mandela) is editor with production design by Helen Scott (Fish Tank, Red Road).

The story focuses on a dysfunctional family of three half-brothers who, following their mother's death, are reluctantly reunited when 14-year-old Casey absconds from care (with his baby brother Severino) in order to track down his real father.

Some Dogs Bite is a Kindle Entertainment production. Filming took place in the UK in the Spring of 2010. 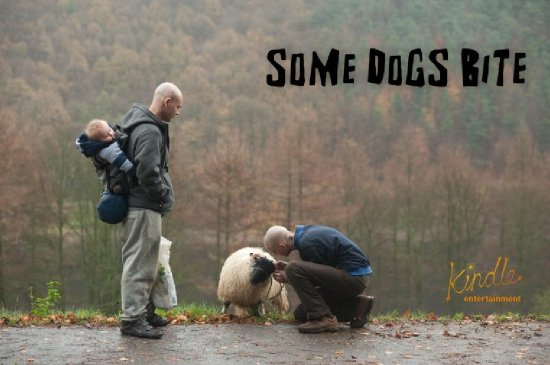 H (18), Casey (14) and baby Severino have been split up after their mother's death. Casey is in care; Severino has been fostered with a view to adoption, and no one really cares what H does; even his mum thought he was a waste of space.

But Casey is determined to keep the family together - running away from care, Casey snatches Severino from the baby's foster parents, steals H's stash of money and posts the cash to a PO Box in Inverness in the North of Scotland. His goal is to find his estranged dad, who moved back to Inverness years ago, a long way from London. To ensure his older brother's help on the journey, Casey makes sure H will need to sign for the money - if H wants it back, he'll have to join them on their road trip north.

It is the start of a life-changing journey, in which the brothers meet other teenagers whose lives are similarly touched by hurt but who also have the potential for change.

Venetia is neglected by her mother and, with her best-friend Seema, is intent on getting what she's owed by her mum's useless ex-boyfriends. Lenny has returned from serving in Afghanistan, only to find his girlfriend has left him and taken his new baby daughter with her.

Along with H, Casey and Severino, this unlikely ensemble of overlooked young people find untapped value in themselves and come to understand the heart-breaking strength of family ties. Together they discover direction in a world that has forgotten about them.

able to take on the burden of parenting, so infantilized have they become, so dependent on escaping through drugs and drink. And children have to take on that burden instead" - Marc Munden.

Prior to this Munden directed The Mark of Cain which told the story of two young soldiers in the Iraqi invasion of 2003 and their involvement with and torture of Iraqi detainees. The drama starring Gerard Kearns, Matthew McNulty and Leo Gregory, won a BAFTA for Best Single Drama as well as the South Bank Show Award for Best TV Drama. Other awards include the Rotterdam Film Festival Amnesty International Prize, the Nymphe d'Or at the Monte Carlo TV Festival with Munden being nominated for a BAFTA as Best Director and the Royal Television Society nominating the feature as Best Single Drama.

Munden's other credits include Shiny Shiny Bright New Hole in My Heart for BBC2 and Conviction which won the Nymphe d'Or at the Monte Carlo TV Festival, The Canterbury Tales - The Knight's Tale, Miranda which starred Christina Ricci, Kyle MacLachlan, John Hurt and John Simm which was in selection at the Sundance Film Festival in 2002 and won the Audience Award at the Raindance Film Festival in 2003 as well as The Secret World of Michael Fry.

An accomplished documentary maker, Munden has also won an Emmy for Outstanding Documentary Current Issues (Heartland) for his production of a Mexican American community in Denver as it fights the threat of commercial expansion.

Sara Feilden is a BAFTA Award winning film-maker whose focus on contemporary issues has won her great acclaim and several awards.

Her most recent project is Who Needs Fathers? which is a major documentary series looking at the impact on generations of children growing up without fathers. Feilden both produces and directs these documentaries which were made for BBC2.

Her TV series Turning Points, directed by Jonathan Hacker,won Feilden her first BAFTA Award in 1999 as well as an RTS Award. Saying It For The Girls won her a second BAFTA in 2000and with Offside, a hard-hitting drama about racism she got her third BAFTA Award in 2002.

Other notable credits include Marrying My Cousin (RTS Award) produced and directed by Feilden, Don't Let Go, directed by Dirk Campbell,and Stopping Distance, directed by Richard Alwyn, which follows the harrowing aftermath of a gang rape.

Since its formation in May 2007 Kindle Entertainment has proved itself one of the UK's most successful and respected production companies winning awards in both the US and the UK.

In 2009, Kindle's highly acclaimed drama Dustbin Baby starring Juliet Stevenson and Dakota Blue Richards and based on Jacqueline Wilson's novel, won an International Emmy Award in the Children's and Young People's category and a BAFTA for Best Writer.

Kindle Entertainment has also recently produced an updated pastiche of the Cinderella story with Jinx, a comedy based upon Fiona Dunbar's best selling novel, as well as My Spy Family, a 26 part live action comedy for Turner Kids.

Brogan and Stokes first met at ITV where Brogan was formerly Controller of ITV Kids and Stokes Head of Development.

"I began working as a writer in residence in prisons in 2000 mostly working with young men and women who had literacy and behavioural problems. As I came to know them and hear their stories, I was struck by the intense loyalty they had for family, especially siblings, and the deep instinct they had to protect each other. Their lives are unimaginable, children who had often never been parented, nurtured or comforted had such capacity to create and abide by their own ethical rules, and still had their humanity intact, despite having often committed crimes where they clearly had little or no ability to empathise with their victim...." Lin Coghlan

Writer Lin Coghlan hails from Dublin and trained at the Rose Bruford College before writing for radio, film, television and theatre.

Coghlan has written many episodes for well known television series including Eastenders, Grange Hill and The Bill, as well as penning The Clinic for Parallel Films/RTE and Patrick's Planet, a 13 part original series for CBBC.

Radio productions include adaptations of The Fortunes of War, Les Miserables and Mansfield Park. Whilst original plays include Passing, The Good Woman's Tale andThe Lambs Snow all for Radio 4.

Aaron Taylor plays 18 year old 'H' in Some Dogs Bite, the estranged half brother of 14-year-old Casey, who reluctantly finds himself carer of both Casey and his baby half brother Sevvie, when Casey decides to abscond from foster care in order to find his real father.

Acclaimed young actor Thomas Brodie-Sangster plays the role of 14-year-old Casey, a young man who following the death of his mother embarks on a journey to reunite his remaining family.

Brodie-Sangster first came to the attention of the British public in Richard Curtis' feature Love Actually in which he played the role of Sam. He also played the role of Simon along side Emma Thompson in the featureNanny McPhee, again for Working Title. And most recently he starred in Sam Taylor Wood's Nowhere Boy in the role of Paul McCartney. The film which also starred Aaron Johnson was nominated for Best British Film at this year's BAFTAs.

He will next star in Ian Fitzgibbon's feature Superhero. The film which will shortly commences production, sees Brodie-Sangster in the lead role of Vincent, playing opposite Andy Serkis.

Other film credits include the role of young Tristan in Tristan and Isolde, the role of Romulus Augustus in The Last Legion, the role of Lucignolo in Pinocchio andthe role of Samuel Brawne in Jane Campion's Bright Star.He will next appear as Mark in Niall MacCormick's Albatross and in Agnes Merlet's The Last Furlong.

Brodie-Sangster is also a familiar face in television having appeared in Lewis, Doctor Who, Entrusted, Featherboy, Hitler: The Rise of Evil in which he played the young Hitler, Bobbie's Girl, Stig, Station Jim and The Miracle of the Cards.

He also voices the role of Ferb in Disney's animated series Phineas and Ferb.