The Rin - Daughters Of Mnemosyne Competition Has Closed

And we can announce the winners. Thanks to all those who entered, and the question seemed to catch more than a few of you out this time. Incidentally, we have rules in these competitions, and they can't be flouted. It shows up if you're not a UK resident, and it shows up if you enter more than once. So for that individual from outside the UK who entered 2590 times, you had already been screened out before we got to picking names out of the hat. What made me chuckle though, was that you had entered 2590 times… with the wrong answer!

Anyway, people who follow the rules win competitions, and our congratulations, and shiny DVDs go to…

Manga Entertainment were talking about new licences for 2011 last week, and it didn't take long before their first big grab was tweeted all over the Internet. Hetalia: Axis Powers will be coming to the UK just after Christmas, and it is the major buzzpoint on most US boards right now, as fans get excited while Funimation announces the dub cast. It's a comedy series where the nations of the world get anthropomorphised into handsome young men who relive key moments of world history. Funimation have put up many of the 5-minute episodes on Youtube if you want to try before you buy. 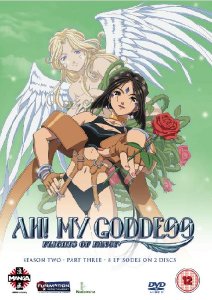 This week, I have mostly been redecorating my kitchen and re-reading a couple of Harry Potters. But I did manage to squeeze out an anime review, and it was one worth squeezing as well, as I got a look at Ah My Goddess: Series 2 - Flights of Fancy: Part 3. This release collects the final two discs of the show's second season, and it has been a delightful series to rewatch. It took its sweet time getting here, what with ADV's woes and whatnot, and I wound up importing a couple of years ago. But for those who were patient, this Manga release is just as good, if not better, with the original ADV discs instead of Funimation's compressed collection. The final episodes of the series throw the Goddess Belldandy, and the eternal ditherer Keiichi's love into peril once again, and the two have to fight against fate, destiny, and mini-ninja to prevail. Will their love hold strong? Most likely. Will they ever get beyond the holding hands stage? Probably not. But it's fun all the same. See how much fun by clicking on my review.


Manga Entertainment release Ah My Goddess: Series 2 - Flights of Fancy: Part 3 today, and it took me longer to type that, than it will for you to buy it.