Blu-ray Ghibli on the way!

When Ponyo was released to the world earlier this year, it got the same treatment as any new movie on home video today, Blu-ray and DVD. But the Ghibli back catalogue is extensive, full of high quality films that have yet to see the high definition treatment. This week Optimum announced that one of the earlier Ghibli films, Nausicaa of the Valley of the Wind would be released in the UK in deluxe Blu-ray form this October, a month before Madman releases it in Australia. At this time there has been no such announcement in the US, so for once, we in the UK get a head start on the rest of the English speaking world when it comes to anime. Given that Madman have released other Ghibli films on the high definition format, it's very likely that other Ghibli back catalogue titles will be going Blu courtesy of Optimum in the very near future. 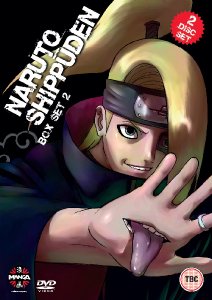 Last week I took a look at Naruto Shippuden: Box Set 2. Already the second collection of new Naruto episodes has arrived, hot on the heels of the first Shippuden movie, and we get to see how quickly the excitement and thrill I felt at the resumption of the main manga storyline wears off. Pretty quickly to be honest, as while it's good to see what happens next in Naruto's pursuit of Sasuke, and Akatsuki's machinations with Gaara, Naruto Shippuden is certainly mincing its words in the process. It's like swimming through treacle… but there is a reason why I really liked this second volume. Click on the review to find out why. 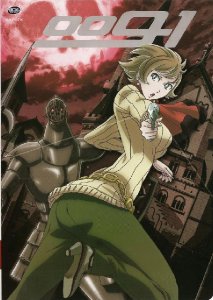 Next it was the turn of 009-1: Volume 2, the one volume that you can't find on UK e-tailer websites any more, and the reason why I imported the whole thing kit and kaboodle from the US. Remember the fembots from Austin Powers? Imagine if they were the stars of the movie, and the movie was played as straight as a proper James Bond flick, instead of spoofing the genre. Well, as straight as you can play it with a protagonist with machine gun breasts. That's 009-1, and it's surprisingly good fun. 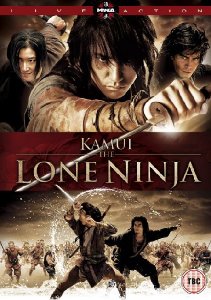 If something a little more live action is what you are in the mood for, then you may be interested in Kamui: The Lone Ninja, which I also found time to review last week. It was originally a manga and anime series in the sixties, but it was only in this century that the cinematic CGI tools existed, to bring the story of the titular shinobi to life. He's got all the weird abilities and skills that you would expect from a Naruto cartoon, but this tale is a lot darker and melancholy than the bright orange one ever offered. Still, put aside the gloomier story, and the reflective characters, and you may get some idea of what a live action Naruto may actually look like, only not in orange.
It's Manga Entertainment who are providing a week of ninja-ness, releasing both Naruto Shippuden: Box Set 2, and Kamui: The Lone Ninja today. ADV released 009-1: Volume 2 in the US a couple of years ago. Actually, given the secret agent tale, it's a full hat trick of ninja, especially as 009-1 is a pun in Japanese. 009-1 is pronounced zero zero ku-no-ichi, and kunoichi is another word for a female ninja.

Great news that the Studio Ghibli back catalogue may be getting the high definition treatment but it does seem that Nausicaa is perhaps an odd title to start with as few people will have heard of it, let alone seen it. However, that may work in its favour as those who are not inclined to double-dip or 'upgrade' to Blu-ray if they have the title on DVD and like the Studio Ghibli output will want to add it to their collections.
posted by David Beckett on 12/8/2010 10:34
No different than Disney starting with Snow White really. Nausicaa was (and is) hugely popular in Japan.
posted by Stuart McLean on 12/8/2010 21:12
7 / 10

I suppose so but if they had started with something like Spirited Away which is known throughout the world, there might not be so many people willing to buy the BD as they already have the DVD.  I'm a big fan of Miyazaki's work but I don't own Nausicaa on DVD so I'll definitely pick up the BD.
posted by David Beckett on 12/8/2010 22:17
Still love 'Spirited Away' and 'Princess Mononoke' best out of all I've seen ...though haven't seen 'Ponyo' yet.
posted by Stuart McLean on 13/8/2010 06:29