Last week it was Gantz, this time it's the turn of Beck, another manga turned anime that is getting the big screen live action treatment. I loved the series when I saw it, a tale of an unlikely band following their bumpy destiny to stardom, among them the unlikeliest of guitarists and vocalists, Koyuki Tanaka, who went from mild-mannered, introverted and bullied schoolkid to… well a mild mannered and introverted rock star. The first trailer finally made it online, and it looks like they're faithfully converting the manga story to the silver screen. Except I couldn't spot hide nor hair of the zombie dog. Once again you can find your way to it via the Anime News Network. 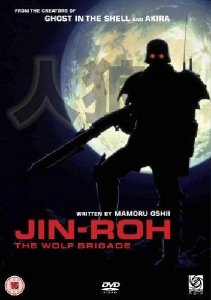 Something old and something new for review last week, and I began by belatedly taking a look at Jin-Roh: The Wolf Brigade. It's a movie that's over ten years old now, written by Mamoru Oshii of Ghost in the Shell fame. But this film is as far away as you can get from cybernetic policeman as possible. This modern adaptation of the Little Red Riding Hood fairy tale is dark, gritty, and unrelenting, casting a terrorist freedom fighter as Red Riding Hood, and a paramilitary death squad member tasked with hunting her down as the Wolf, in an alternate reality where Germany won the war and occupied Japan. Its unremitting examination of terrorism and the state makes it painfully relevant, now more than ever, and you can read more of my reaction by clicking on the review. 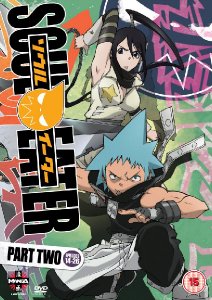 I then cast my eager gaze upon Soul Eater: Part 2. I found Part 1 to be a whole lot of fun, surely more fun than a shonen action show has any right to be. It's the sort of show that has good versus evil, with the good guys levelling themselves up through a tournament style sequence of fights, with a story and characterisations loosely tacked on as an afterthought. Except Soul Eater is anything but. It's Studio Bones anniversary show, and it tells, with sublime animation, an involving and interesting story, and great and quirky characters. You probably won't believe me, but I found Part 2 to be even more fun than Part 1. Click on my review and see if I'm fibbing. 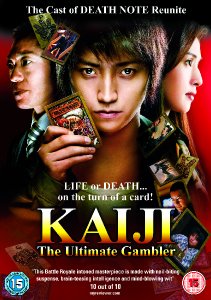 There was also room for a little live action adaptation next. You may not have heard of Kaiji: The Ultimate Gambler, but it is based on a popular manga series that spun off a television anime series as well. You won't find the DVDs in the shops, as it hasn't been licensed in the English-speaking world, and you won't find the manga for the same reason. But Kaiji: The Ultimate Gambler does reunite the cast of the Death Note live action features, which is certainly a selling point. We have not one, but two reviews for you. First you can read Curtis Owen's take on the film, then David Beckett took a look too.
Optimum Asia released Jin-Roh: The Wolf Brigade in 2007, while Manga Entertainment release Soul Eater: Part 2 today. 4Digital Asia release Kaiji today as well.