Blu-ray
Nausicaa Of The Valley Of The Wind
Related Articles

Article
Swedish director Anders Banke's Newsmakers out on DVD in May

The Boondock Saints II hits DVD in May 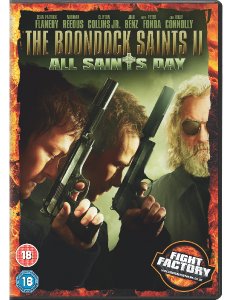 Guns are Blazing Because the Boys are Back!

The tough, stylized, vigilante-justice saga follows the boys when they return to Boston after being framed for the murder of a priest. Joined by a new accomplice, the Saints exact vengeance on those responsible and, at the same time, discover a deeper plot rooted in their own family's legacy of violence.

The DVD special features on The Boondock Saints II: All Saints Day include two commentary tracks with filmmakers & cast, deleted scenes, and two behind-the-scenes featurettes: the making-of documentary "Unprecedented Access: Behind the Scenes" and "Billy Connolly and Troy Duffy: Unedited," a multi-camera, off-the-cuff conversation in which they discuss the success of the first movie, their evolutions as filmmaker and actor, and what they hope to capture on their second outing.

The Boondock Saints II: All Saints Day will be available on DVD for £19.99

The two have been in deep hiding with their father, Il Duce (Billy Connolly), in the quiet valleys of Ireland, far removed from their former vigilante lives. When word spreads that a beloved priest has been killed by sinister forces from deep within the mob, the brothers return to Boston to mount a violent and bloody crusade to bring justice to those responsible. With a new partner in crime (Clifton Collins Jr., Star Trek) and a sexy FBI operative (Julie Benz, TV's "Dexter", Rambo) hot on their trail…the Saints are back!

The Boondock Saints II: All Saints Day was written and directed by Troy Duffy from a story by Troy Duffy & Taylor Duffy. Chris Brinker and Don Carmody produced with Lloyd Segan and Rob Fried serving as executive producers.

DVD Special Features Include:
The Boondock Saints II: All Saints Day has a running time of approximately 113 minutes and is rated 18.