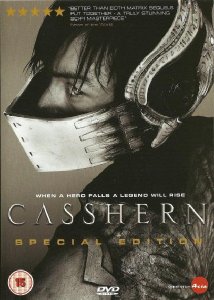 Just two reviews for you this week, and one of them is a live-action film at that. Since it was adapted from an anime and manga, it ought to count anyway. Besides, with all the CGI and green screen work, it's half animation in itself. I'm talking of course about Casshern, one of the raft of digital backdrop films that were made a few years ago, alongside titles like Sky Captain and the World of Tomorrow, and Immortel. Casshern was a seventies superhero, but he gets a anti-war polemic update in the 2004 movie, which sees the powerful warrior resurrected by his father in a war-weary, polluted, dystopian future. See if the breathtaking visuals outweigh the story by clicking on my review. 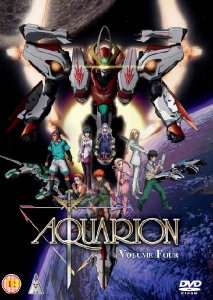 Then it was the turn of Aquarion: Volume 4, in which the mecha series comes to its conclusion. You would have had to twist my arm to say it three volumes ago, but the idea of teenagers fighting giant robots by piloting giant robots of their own is actually beginning to grow on me. In fact I can freely admit now that I enjoy this series, and have found its action ethos coupled with a rather interesting mythology to be really quite appealing. Of course final volumes are where anime series can so often totally blow it, so it will be fascinating to see if Aquarion remains strong, or falters at the final hurdle.


Momentum Asia released Casshern in 2005, and it has been lurking in the bottom of bargain buckets ever since. MVM release Aquarion: Volume 4 on the 15th of March, which is a tad delayed from their initial schedule.