The Crimson Wing out in March on Blu-ray and DVD 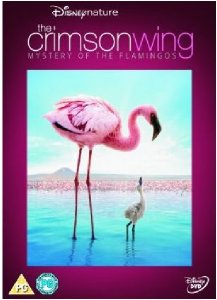 THE CRIMSON WING:
MYSTERY OF THE FLAMINGOS

Disneynature invites you on a journey of beauty and life's struggles in the visually stunning and inspiring documentary, The Crimson Wing: Mystery of the Flamingos, which is available on Disney Blu-ray and Disney DVD on Monday 15th March from Walt Disney Studios Home Entertainment.

Narrated by Mariella Frostrup and filmed in Lake Natron, Northern Tanzania, The Crimson Wing follows the life cycle of a colony of crimson-winged flamingos from tiny flamingo hatchling to adult.  Giving unprecedented and compelling access into the lives of these secretive birds as they struggle to survive and prevail over danger and fate, The Crimson Wing is a must-see for all nature fans.

Featuring never-before filmed landscapes, set against a dramatic backdrop of remote and forgotten wilderness, The Crimson Wing chronicles one of nature's last awe-inspiring mysteries, reminding us that here on earth there is a universe waiting to be discovered.