Storage out on DVD this March 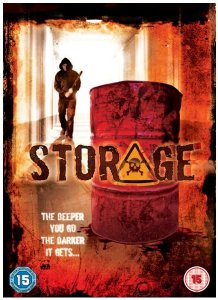 Storage tells the story of Jimmy. A young man of 17, Jimmy (Matt Scully) is bereft and alone after the brutal murder of his father. Burdened by grief, he goes to live with his Uncle Leonard (Damien Garvey), an ex SAS officer, who runs a below-ground storage facility in the city. While exploring the maze of corridors Jimmy comes across a deeply disturbed man, Francis (Robert Mammone), who seems to be hiding evidence of a crime in his storage unit.

Jimmy enlists the services of his flirtatious co-worker Zia (Saskia Burmeister) and together they come back in the middle of the night to break into the man's room. Just as they're about to search the unit, they're busted by Leonard who has followed them there. He fires Zia and reprimands Jimmy, but then discovers that Jimmy was right, inside a red metal drum barrel there is clear evidence of a murder. Not trusting the police to do anything about this crime, they decide to take the law into their own hands and track down the killer. But once inside Francis's house they realise that the situation is not as simple as they believed and Jimmy soon finds out that once you start down a dark road, it's almost impossible to turn back…