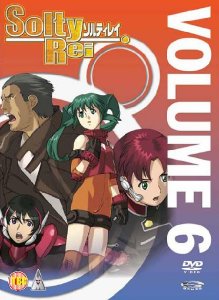 I'm still digesting turkey, which means I can barely summon the energy to type, let alone come up with anything substantial for the first anime review roundup of the year. So just the reviews then, beginning with Solty Rei: Volume 6. It's the conclusion of another Gonzo futuristic mystery action sci-fi series. It's usually the point in the series where Gonzo mess up completely, and I've lost count of the multitude of promising series leaving me with a despondent sigh. Solty Rei has turned out to be one of the more promising series that I have seen from Gonzo in quite a while, with a well constructed story and appealing characters, all packaged in a curious bright and shiny film noir fusion. I have high hopes for the final volume, although consequently there's greater room for disappointment. See by clicking on my review if this finale delivers. 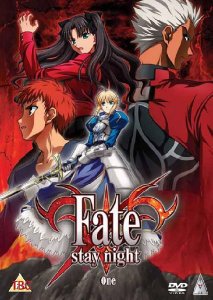 As one series ends, another begins, and my final review of the week was the first volume of Fate/Stay Night. On the surface, it looks like it's the last show that I would be interested in. It's based on a console game, it looks like an RPG fantasy crossed with a Pokemon trope, with mages battling for the Holy Grail by drawing forth servants from the spirit realm to wage war on their behalf. Two things work in its favour though… First the people that created Lunar Legend Tsukihime also created the game that inspired this, and Tsukihime was a show that was more than just a game conversion, and second, it has received considerably favourable word of mouth on anime forums. See if all that makes a difference by reading my review. And then you can take a look at these clips from the show…

Two reviews for MVM product this week, they release both Fate/Stay Night: Volume 1, and Solty Rei: Volume 6, and they do so today.