Complete Season 4 of Supernatural out in November 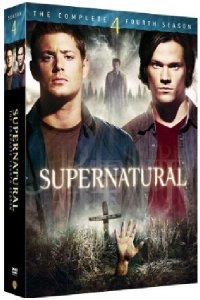 SUPERNATURAL THE COMPLETE SEASON 4
Out on DVD - 2nd November 2009


Divulge in the Winchester brothers' fearless quest to rid America of paranormal evils with the complete series of Supernatural Season 4, available to own for the first time on Monday 2nd of November courtesy of Warner Home Video.

Twenty-five years ago, Sam (Jared Padalecki) and Dean Winchester (Jensen Ackles) lost their mother to a mysterious and demonic supernatural force - hell hath no fury like a Winchester scorned! This concluding Volume to Season 4 will pit the brothers against their toughest challenge yet as the bond they share is shaken to the core.

After selling his soul in return for his brother's life, Dean finds himself dragged away by hell hounds at the end of Season 3. In the opening of Season 4 Dean awakens in a pine box after escaping hell's clutches with no recollection of his time there or how he was freed.
The two brothers are soon reunited but all is not the same as it becomes apparent that Sam is hiding secrets from Dean. Could Sam still possess supernatural powers as the Demon with yellow eyes prophesized?
In search of answers and demonic blood, the brothers hit the road to battle a legion of new supernatural forces including; malevolent spirits, Dracula himself and a drunk, heavily armed 7-foot-tall teddy bear. Guest stars include John Rubenstein (Angel, Family, Day Break) and Barry Bostwick (Spin City, Law and Order: Special Victims Unit) as Jay.
As the brother's battle continues in Season 4 it becomes clear that these isolated paranormal cases are a small-part of a terrifying war heading their way. In an explosive twist rumours begin to emerge that the fearful Lucifer will soon be released from the fires of hell. If he should walk free the Winchesters will have to become martyrs against the Apocalypse.
The brothers discover a series of comic books titled 'Supernatural' that accurately chronicle their lives as demon hunters. Furthermore the brothers encounter a 19 year-old boy named Adam (Jake Abel) claiming to be Dean and Sam's long lost half brother. Adam's history sparks curiosity and jealousy in equal measures as Dean becomes infuriated by the sheltered and normal life his apparent half-brother has led.

Both brothers are forced to probe into their troubled past again and return to one of their old high schools to purge the students of a spirit. This causes a series of revealing flashbacks showing Sam being repeatedly picked on by the school bully, whilst Dean rules the school as the popular kid. The differences that surface in the brothers' past threaten to destroy their quest to rid America of the supernatural evil.

In the season finale, Dean and Sam decide to attack the mounting demon force in different ways. Sam joins forces with Ruby in a final attempt to kill Lilith, whilst Dean has to defeat Lucifer himself. Dean learns of a plan to end the world and must stop Sam before he falls into a trap that could destroy all humanity. The differences the brothers have experienced throughout the series have caused a rift; only together can they stop the apocalypse; will their reunion come too late?

Created by Eric Kripke (Battle of the Sexes, Boogyman) and executively produced by McG whose directing achievements include several blockbuster movies (both Charlie's Angels movies and Terminator Salvation) and The O.C TV series, Supernatural the Complete Season 4 is one of this year's stone-cold-must-buys.

Supernatural Season 4 complete DVD will include

In the beginning
When the Levee Breaks
Lucifer Rising