Article
Labour Pains with Lindsay Lohan out in August

Article
Monday Monday out in August

Article
Battle of Algiers out in August

Another horror flick Smash Cut is out in August 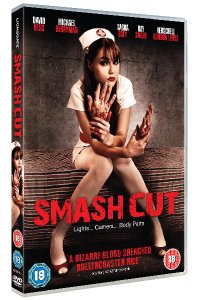 SMASH CUT is the dizzying and unique homage to the classic horror films of Herschell Gordon Lewis. SMASH CUT is the story of ABLE WHITMAN, a troubled filmmaker losing his mind in an extraordinary way.
After his latest "serious" film is met with gales of laughter, Able decides to drown his sorrows at a local strip club--where he meets dancer GIGI SPOT. Minutes later, he's convinced her to star in his next project. Minutes after that, he's killed her in a drink driving accident. Needing to dispose of the body, Able stumbles upon the one place nobody would notice a corpse…spread around the set of his new horror film.  When the response to this new footage is praised for its realism, the guilt ridden Able has a complete mental breakdown. Believing he has finally discovered the key to making a great horror film, the director quickly discovers that one human body doesn't yield a lot of parts, and if he wants to finish, he's going to have to keep on killing.