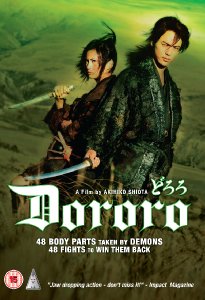 "FEATURES EVERYTHING ONE COULD REASONABLY HOPE TO FIND IN AN ACTION BLOCKBUSTER - ACTION, SUSPENSE, AN ENGAGING PLOT AND MIND-BENDING WEIRDNESS." - CINEMASTRIKESBACK.COM

Fearing the imminent decline of his clan, samurai warlord Daigo Kagemitsu makes a deal with a circle of 48 demons who offer him the power to conquer and rule the world in exchange for the body parts of his future unborn son. When the child is eventually born as nothing more than a limbless torso and an eyeless, earless head, Daigo wants to kill it but instead agrees to his wife's request to place it in a floating basket and set it off down the river. The deformed orphan is soon discovered and rescued by a mystical physician who creates artificial organs and body parts for the boy, before naming him Hyakkimaru and raising him as his own.

Years later, having reached adulthood, Hyakkimaru embarks on a quest to seek out and destroy the 48 demons that made the pact with his natural father, thereby reclaiming his real body parts so he can become fully human. Early into his journey he crosses paths with a sassy young thief, an orphan who adopts the name Dororo. A girl who was raised as a boy by her parents in order to make her emotionally stronger in a troubled and uncaring world, Dororo has a vengeful quest of her own to fulfil and joins Hyakkimaru on an adventure that will reveal to them many dangers and unexpected surprises.

Beginning with echoes of "Frankenstein", "Edward Scissorhands" and "Pinocchio" before switching gears to become something akin to a comedy-horror movie as directed by Akira Kurosawa, DORORO is a fun and energetic romp packed with inventiveness, a countless array of colourful demons, acrobatic martial arts action and plenty of humour.