This Is Spinal Tap: Up To 11 Edition
Related Items

Blu-ray
In The Loop

This Is Spinal Tap: Up to 11 - 25th Anniversary Edition

1982 and the world's loudest rock band, Spinal Tap, are about to embark on their biggest world tour to date. Along for the ride is film-maker and fan Marti DiBergi (Rob Reiner), there to make a behind-the-scenes tribute to his favourite heavy metal band. However instead of a celebrating the genius of the musicians behind such classics as "Big Bottom" and "Hell Hole", the documentary captures the cracks as they begin to appear for this band whose time has come… and now appears to have gone again. Whilst the tour turns out to be not the sell-out they had hoped for, the band's hapless manager Ian Faith (Tony Hendra) unwittingly orchestrates a cacophony of errors: stage props malfunctions, miniature sets and an all-black album cover to replace one that the record company deemed too offensive to women: "What's wrong with being sexy?" The final straw however might just prove to be the interference of guitarist David St. Hubbins's girlfriend Janine in the band's business affairs, shutting out childhood friend and co-lead guitarist Nigel Tufnel. With a camera recording all the chaos, the archetypal portrait of a band in crisis is born.

25 years later, with Spinal Tap on tour once more, it's time to celebrate once again the much-loved and oft-quoted greatest "rockumentary" ever made. Relive the band's triumphs and disasters, get your bass out for "Big Bottom" and prepare to smell the glove. With bumper extras including a ltd edition featuring a mini Marshall Amp; a brand new documentary featuring comedians and musicians celebrating 25 Years of Tap and the first Region 2 release on blu-ray, this one really promises to go up to 11… 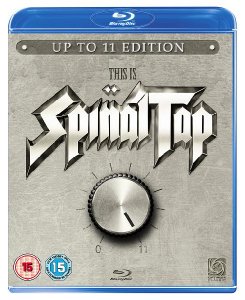 LTD EDITION Discs 4 & 5: will be the original soundtrack and the blu-ray disc 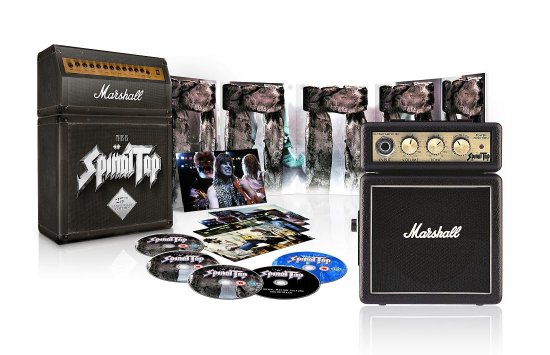 I can't remember the last time I was this excited about a DVD or Blu-ray release.  I'm currently working out where to get the money from and where to put the mini Marshall amp!