DVD
The Venture Bros.: Season One

Article
Action thriller Defiance out in May

Article
A Touch of Class on DVD this May 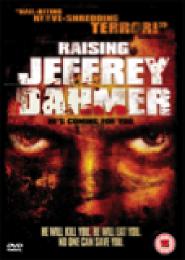 HE WILL KILL YOU. HE WILL EAT YOU. NO ONE CAN SAVE YOU

One of America's most notorious and horrific serial killers, Jeffery Dahmer was convicted of slaughtering and dismembering 17 young men in a killing spree that began with the gruesome slaying of a hitchhiker in 1978. When he was arrested in 1991, the grim details of Dahmer's crimes made global news as the world heard graphic reports of murder, sexual perversion, butchery, cannibalism and a freezer packed with human body parts.

Closely following the true-life events, RAISING JEFFREY DAHMER unflinchingly examines the turbulent times of the Dahmer family as they finally become aware of the scale of their son's sickening crimes.