After the big razzamatazz of Anime Expo last week, the news is busy smoking the equivalent of a post-coital cigarette, and pretty much all there is to offer is a rather satisfied sigh of information. Should print not be enough for you, Eyeonanime are hosting an Expo podcast, which offers you a chance to hear the headlines as they happened last week. It being an expo in a cavernous hall, it may help if you have one of those sound systems that you see in espionage thrillers, the ones that can separate a mouse fart from a hurricane, otherwise you may have to strain your ears a bit.

Sword Of The Stranger at the Barbican

Anime on the big screen again. I love it when that happens. In this case, it's Beez's new acquisition, Sword of the Stranger. Samurai slice and dice action is yours to enjoy at the Barbican in London on Tuesday 25th November 2008, with an introduction from anime expert and co-author of the Anime Encyclopaedia, Helen McCarthy. Read more at Otaku News.

Warner Bros have the rights to Ninja Scroll

2008 has been the year that Hollywood has started milking anime to compensate for their complete lack of creativity, with the Wachowskis' Speed Racer making a lurid impact, the forthcoming Dragonball movie, and the news earlier this year that a Cowboy Bebop film was in development. Now add perennial Manga Entertainment freaky ninja action favourite Ninja Scroll to the list, as Warner Bros have the rights to a live action adaptation. Quite how the sex and gore will make it to the big screen is a mystery, but Leonardo DiCaprio's Appian Way is apparently producing. There's more at AnimeOnDVD. 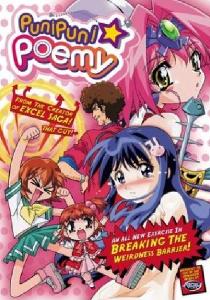 It was pretty light on the review front too, with one new title to look at, as well as one blast from the past. That blast was Puni Puni Poemy, a rather naughty spin-off from the madcap Excel Saga. It's a parody of the magical girl genre, which sees motormouth schoolgirl Poemy Watanabe given the powers of Puni Puni, with which to defend the earth against perverted aliens. It's postcard humour of course, in completely bad taste, and splendidly funny. And best of all, two overpaid 'comedians' don't prod any pensioners. It's also banned in New Zealand for some odd reason… 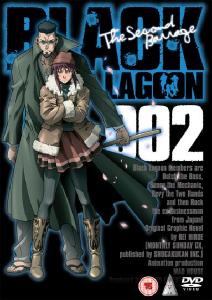 Do you remember 'grin like an idiot' TV or movies? You don't get too much of it nowadays, where everything has to be deep, with character development, or a message. Time was, you could put on an episode of the A Team, or stick Commando in the video, and just spend an hour or two, glued to the screen, grinning like an idiot. Each successive volume of Black Lagoon has left an inane smile plastered to my face, worthy of a Batman villain. Share in my unadulterated appreciation of Black Lagoon: The Second Barrage: Volume 2 by clicking the requisite.

Puni Puni Poemy has been available for ages from ADV, and is probably on sale, somewhere, right now. Black Lagoon's latest instalment comes out on November 10th, courtesy of MVM.